Plainfield, Connecticut, USA (June 10, 2019) — A Reason to Ride, a veterans charity, has been organizing their Flag Day Run yearly since 1999. Dominic Rutigliano, the group’s treasurer, said that it’s raised at least $25,000 this year.

The run itself lasted about an hour and a half, said the charity’s chairman, Dan Martin. The route took riders from Plainfield to plenty of local towns, such as Griswold and Voluntown. Once the riders reach Norwich, they start to make their way back to Plainfield from the west. 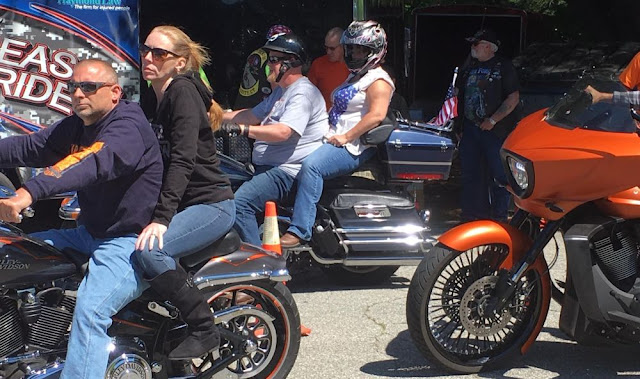 Motorcycle riders begin the charity Flag Day Run for A Reason to Ride on Sunday at the Plainfield Veterans of Foreign Wars. Photo: Matt Grahn

At the Plainfield Veterans of Foreign Wars, the ride’s meeting point, it appeared there was a sea of motorcycles in the parking lot. Bikers paid $20 to ride in the event, which included lunch afterward. Behind the VFW building, there were stands from bike dealers, apparel vendors and other biker causes, such as Bikers Against Child Abuse.

Before the run started, there was an opening ceremony on the VFW’s back porch. that included words from the sponsors, a rendition of the national anthem, and a blessing of the motorcycles. After the ride, Redlight, a local band, would entertain during lunch.

Even with all the entertainment, Martin says that helping with the veterans is the best part. He also likes meeting the people that A Reason to Ride has helped out.

“It’s rewarding, of course. They’re appreciative of what we did. Sometimes, they even want to give back,” he said.

That want to give back applies to other veterans as well. John Koch, who served in the Navy from 1981 to 1987, has come to event almost every year for the “camaraderie.”

“Everyone comes here to have a good time, with a common goal and purpose to raise money for veterans,” he said.

Gary Crawford also feels the camaraderie, saying “We all do our parts in every way everyone can.”

Crawford, who served in the Coast Guard from 1980 to 1984, said there is a connection between veterans and motorcycle culture.

“After you’ve been told what to do every single day for however long your stint was, it’s kind of nice to be able to choose your own direction, your own speed,” he said. “Pure examples of freedom we can share in these United States.”

Rutigliano started working with A Reason to Ride 12 years ago, when he moved next door to another committee member, Dan Barber. After attending a couple meetings, Rutigliano was “hooked.”

Rutigliano, who also served in the Air Force during Vietnam, likes the event because the only administrative costs are insurance related, as the entire group is volunteer run.

“You hear a lot of bad publicity about some of these giant fundraisers. I’m not trying to knock anybody, but I don’t like it when someone is promoting an organization and they’re going to get paid for it,” he said. 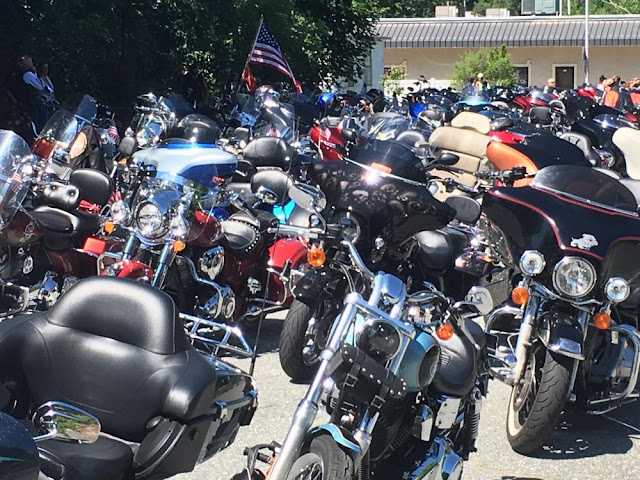 Motorcycle are parked before the charity Flag Day Run for A Reason to Ride on Sunday at the Plainfield Veterans of Foreign Wars. Photo: Matt Grahn

Rutigliano plans on helping out for as long as he can. Rutigliano is hopeful the event can continue for years to come.

“Every year, we get a couple of new people coming onto the committee. I can’t see why we can’t continue for the next 10, 15 years,” he said.