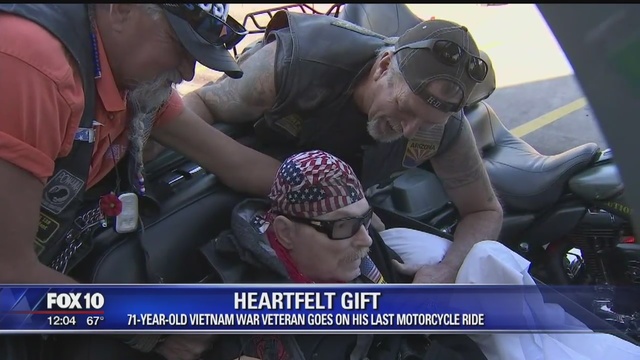 McKella Williams, Jones' caretaker, came up with the idea after learning of his love for motorcycles and worked to make it happen. Retired Mesa Police officer John Duhigg drove the motorcycle with Jones in a side car and Patriot Guard Riders rode along side the two.

The 17 mile ride started and ended at the Arizona State Veteran Home. Jones worked as a state trooper in Pennsylvania as well as an undercover officer. He was a Deputy Sheriff in Fountain Hills and worked with Sheriff Joe. He also worked in the military police and is a Vietnam War Army Veteran.

The words themselves are inspiring, but even more inspiring is the man who wrote them.

Meet Lt. Dan – not the character made famous in the 1994 film "Forrest Gump", but Lt. Dan Holman from Las Vegas.

Lt. Dan with his modified motorcycle

Yes, he is an Army veteran and yes, he is missing both legs -- a double amputee who lost limbs on the battlefield, but never lost his love of riding.

"[It] gives us time to clear our heads and think,” Dan says.

With the help of a modified bike, which utilizes mostly hand controls, Dan is able to hit the open road with no problem. The real difficulty, he says, came back at the dealership. He had no way to transport his wheelchair on the bike, which caused problems. "I had to go from the service department, to the customer waiting area on crutches all the time,” Dan said. “When you do it on crutches, with no legs, it gets very demanding”

Dan found himself having to travel a distance of about 900 feet both ways. So he approached Samantha Cashman the Marketing Director at Red Rock Harley-Davidson with an idea that just made sense.

"If you say Lt. Dan, everyone's little ears perk up,” Cashman said. “So I asked the general manager if I could bring him in a wheelchair."

And so, Lt. Dan's Wheelcharrier program was born. A sign and a donated wheelchair now greet disabled customers at more than 175 Harley Davidson dealerships across America.

“If they need to use it one of our service managers or our service writers will wheel it out to them, to help them out of their cars. And then to take them around the store,” said Cashman. The wheelchairs are donated by various groups, and Dan delivers them to dealerships himself. The program now is now receiving national recognition.

Which brings us back to Dan’s poem -- words about humanity and freedom – a freedom to ride, and a freedom to serve, disability or not.

It don't matter what branch of service you are, we're all brothers and sisters.

We didn't ask for it. Everyone has a disability of some form. 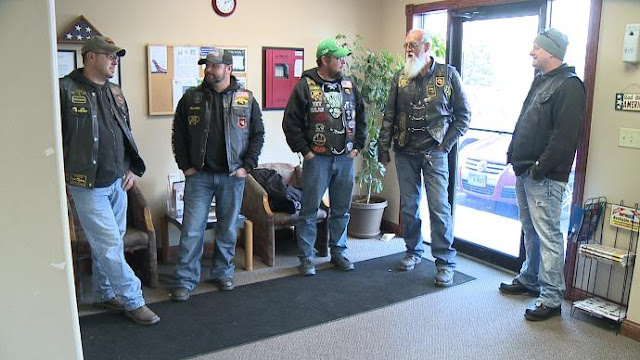 KSFY News photojournalist Dave Hauck has their story below.