Driver that killed 7 bikers was high

Columbia, New Hampshire, USA (August 1, 2019) — The driver charged in connection with a New Hampshire crash that killed seven motorcyclists was high on drugs and was reaching for a drink when the accident occurred, according to a report obtained by the Boston Globe.

The Federal Motor Carrier Safety Administration report says 23-year-old Volodymyr Zhukovskyy tested positive after the crash for "an unspecified drug," either a narcotic or an amphetimine. The report said the drug made him incapable of driving safety. 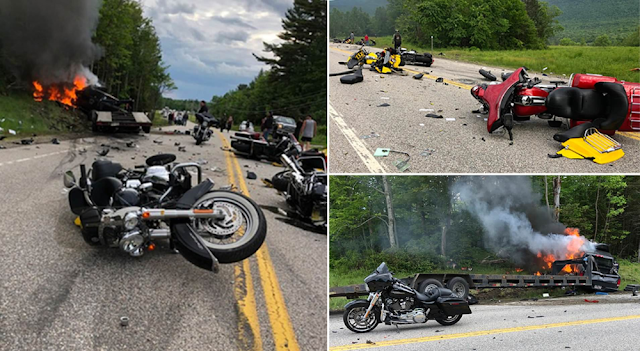 The National Transportation Safety Board issued a prelminary report last week summarizing the details behind the June 21 crash in which a pickup truck driven by Zhukovskyy crashed into the bikers in Randolph. The report affirmed early reports that Zhukovskyy crossed the center of the road and collided with the bikers.

Related | Ride for the Fallen 7 this weekend

Zhukovskyy, of West Springfield, Massachusetts, has pleaded not guilty to negligent homicide. Officials say Zhukovskyy's license should have been suspended because of a drunken driving arrest.

Investigators said Zhukovskyy's Dodge pickup truck was towing a flatbed trailer as it traveled west on Route 2 in Randolph when it crossed into the eastbound lane and collided with the group of 10 motorcyclists, members of the Massachusetts chapter of the JarHeads Motorcycle Club.

Zhukovskyy, an immigrant from the Ukraine, has a lengthy record of incidents on the road. He was arrested on OUI charges in 2013 in Westfield, Massachusetts, and again last month in Connecticut, when he was allegedly found at a Walmart revving his truck engine and jumping around outside his vehicle.

Westfield Transport also has a history of violations, including seven for unsafe driving, according to a review of federal vehicle safety data.

Zhukovskyy still had his commercial driver's license at the time of the wreck, but Massachusetts determined afterward that it should have been revoked based on the May 11 OUI arrest in Connecticut.

In the wake of the New Hampshire accident, Massachusetts Gov. Charlie Baker and other top state officials promised to conduct a full review of the Registry of Motor Vehicles to determine why out-of-state notifications about driving offenses weren't being reviewed.

The fallout from the crash led to the resignation of Erin Deveney, the former head of the Massachusetts Registry of Motor Vehicles. Former MassDOT Chief Operating Officer Jamey Tesler is currently serving as acting registrar.