Ardmore, Ok (December 23, 2018) — Ardmore’s homeless can now stay a bit warmer thanks to the generosity of some friendly bikers. Saturday afternoon the American Iron Riders were outside The Grace Center giving away socks, toboggans and coats to the city’s homeless. In addition to the clothing, they were also giving away homemade soups, cornbread and cookies.

Secretary Karen Riley said this is the second year they have held the event and explained how it first began. “I heard that a high school friend was homeless and on the streets of Ardmore,” Riley said. “So last year I thought, I’m going to go find him.“ 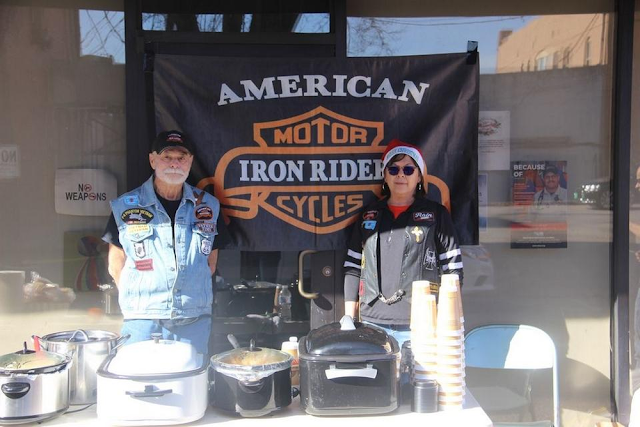 Riley enlisted the help of the club, and last December they loaded up a wagon with homemade soup and hit the streets of downtown. Not only did she find her friend, but they also served 43 others in the process. This year, however, they decided to do things a bit differently by staying in one location. “We thought it would be easier for everyone if we just set up in one spot,” Riley said. “We feel like we missed some people last year, and don’t want that to happen again.

While helping the homeless is something new for the American Iron Riders, the club has a long history of charity. “At first, our main goal was to help the veterans,” Riley said. “So we have two cookouts a year for the veterans at the Veterans Center and we play bingo with them once a month.“ They also help area school children twice a year. In August they take children in need back to school shopping, and just last week they went Christmas shopping with some students from Take Two Academy. “We had 26 kids,” Riley said. “They each got $100 a piece, and we all just had a wonderful time.“

Riley found the generosity of one particular student to be truly inspirational. “We had one child from Take Two who purchased all of his Christmas and then turned around and donated it back to Toys for Tots,” Riley said. She thinks this student’s act of kindness is very much in line with American Iron Rider’s mission. “The reason we do all of the things we do is because we’re all so blessed and we just want to pass our blessings on,” Riley said.

SOURCE: The Daily Ardmoreite
at 8:55 PM

Rolling Thunder comes to an end

Washington, D.C. (December 12, 2018)  — One of the nation’s most iconic displays of support for military veterans, those missing in action and prisoners of war is coming to an end.


The annual Rolling Thunder ride — which has brought thousands of bikers to the D.C. area for decades — is hitting the brakes. They won’t be riding after their May 2019 run, group officials confirmed. 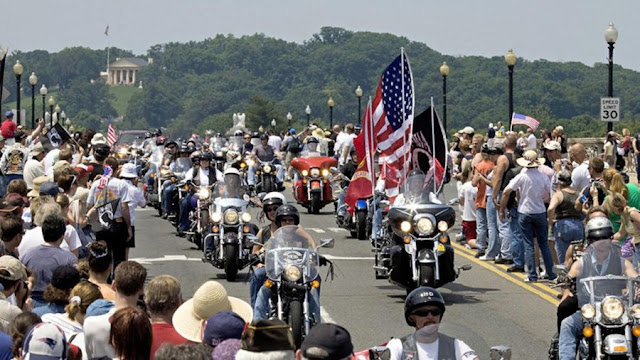 The key issues cited by the group are costs and communication problems with the Pentagon Police Department.

“We had so many problems in the last two or three years with the [Pentagon Police] and the parking facilities after we leave the Pentagon parking lot,” Rolling Thunder, Inc. board member Gus Dante said.
“And then it came to a boil this year when, the south lot, we had not one motorcycle. In the year before we had 10,000 bikes,” Dante said. “In the main lot, they were being turned away.”

Police escorted members to various areas around the National Mall, Dante explained. But bikes were supposed to go to the Lincoln Memorial, where a stage had been set up for ceremonies after the run.

“They just had enough,” he said.

It’s now up to the 90 chapters themselves to independently put rides together. For example, the New Jersey chapters can team up with Pennsylvania and New York, and maybe part of New England, and gather at a centralized location.


Dante says there are a lot of members who believe independent organization will work out even better than Washington.

He believes future rides will be “more personal” and get “more coverage” for veterans issues.

“Let’s face it, we got coverage for a few seconds in D.C. and that was the end of it,” Dante said.

The reason the ride exists is to raise money and awareness for veteran issues.

“I’m a POW activist,” Dante said. “We’re trying to bring that [to] the forefront. … We can never forget POWs, MIAs that are still missing — 83,000 are still unaccounted for from all the wars.”

Rolling Thunder, Inc. Founder and Executive Director Sgt. Artie Miller sent an excerpt of the January 2019 letter that he will be sending to the group’s millions of supporters:

“Rolling Thunder® XXXII, “Ride for Freedom” will take place on May 26, 2019 in Washington, D.C. — the final Thunder Run in D.C. This will be the last demonstration the organization does as a unit in Washington. It has been a hard decision to make, after much discussion and thought over the last six months Rolling Thunder National Officers have concluded to end our 32 year annual D.C. Memorial Weekend event.

As a result of changing times the organization and Mission needed to be reorganized and reevaluated. Reasons which determined our decision were the Pentagon Security Police/Washington Police officials continued lack of cooperation, increased harassment to our supporters and sponsors. As demonstrated this past Rolling Thunder “Ride for Freedom” XXXI many of our supporters were diverted and prevented from entering the South Pentagon/Boundary Lots. Event staging costs have soared to $200,000.00 plus, lack of new Corporate Sponsor funding and the general public declined support of our event product sales (patches/pins/stick flags) in the Pentagon Lots. Financial factors are draining the organization funds if we continued this major costly annual event in Washington.

We will continue the POW/MIA Mission through our ninety Rolling Thunder State Chapters across America coordinating demonstrations starting 2020 Memorial Weekend in their own states, or joining forces with other state chapters. Hopefully, many supporters who could not make the trip to DC can participate in their state and we may get more media coverage on the state level on the POW/MIA issue than we received in DC. This will be the final mailing of our Rolling Thunder “Ride for Freedom” Washington, DC. See our website rollingthunder1.com periodically for updates regarding 2020 State Chapter “Ride for Freedom” demonstrations. Remember our POWs/MIAs, our Troops serving and God Bless the United States of America! Hope to see you at Rolling Thunder XXXII, “Ride for Freedom” the last thunder demonstration in Washington, DC.”

Rolling Thunder was established in 1987 to call attention to any prisoners of war or those listed as missing in action. Riders said they are also committed to helping U.S. veterans from all wars.

Many of the bikes fly American flags or the black and white POW/MIA flag, which features the silhouette of a bowed head and the words, “You Are Not Forgotten.”

“This is a tribute to all the fighting men and women of the United States, the sacrifices they made, and it’s to honor them,” said John Santillo of Vernon, New Jersey.