Cove County, Kansas, USA (March 1, 2020) BHV — Two drivers were killed on I-70 in Kansas Saturday evening in separate crashes that were both linked to the funeral procession for veteran and Pearl Harbor survivor Donald Stratton.

The first crash involved a member of the Patriot Guard who lost control of his motorcycle and was hit by a car, according to Kansas Highway Patrol.

Scene of accident along I-70

There were initially reports that the rider was hit by a second vehicle, but a spokesperson with KHP tells 11 News the third vehicle was only hit by accident debris. 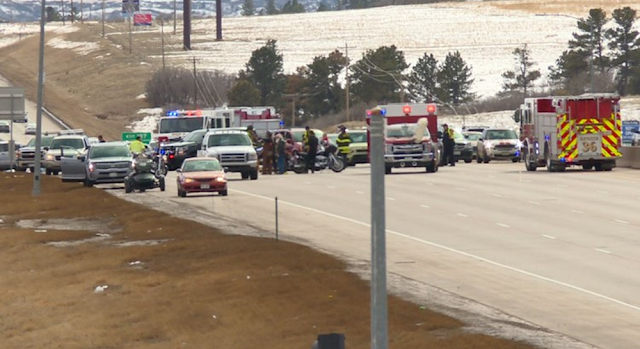 The rider was identified as 65-year-old Lennie Riedel of Kansas.

The second crash happened just 10 minutes later when an 81-year-old driver, who was not part of the procession, tried to go around the traffic diversion on the interstate that had been set up to keep vehicles away from the original motorcycle crash. He ha been identified as Carl Silvrants of Virginia.

Station KWCH says the driver ran into a parked fire truck and was killed at the scene. The firefighter was not injured.


The crashes happened in Gove County about 90 miles from the Colorado/Kansas state line.

Colorado State Patrol also confirmed at least one crash related to the procession. A spokesperson for CSP said a crash involving two motorcycle riders happened shortly before 2 p.m. on I-25 in Castle Pines. One of the riders was seriously hurt but is expected to recover.

State Patrol did not have further details on how the crash happened but said the riders' part of the procession had "dispersed" around the time of the crash.