Oneonta, New York, USA (November 7, 2019) — Chris Chase, son and grandson of veterans, just wants to make sure that all veterans can enjoy the ride safely.

“We were concerned that many of our motorcycle runs involved a lot of alcohol,” said Chase, assistant director of Oneonta Post 259’s American Legion Riders. “We’d stop at a Legion, people would have a few beers. And then we’d stop at the next one and they’d do the same. We don’t have anything against alcohol, just against drinking and driving.”

So last fall, Chase unveiled the “Dry Run” concept, where the Legion’s annual rides would all be alcohol-free. “The first time we did it was the 2018 Foliage Run,” he said. “And we got some flack. But Ken Gracey at the Red Knights 44 Motorcycle Club (a firefighter and EMS motorcycle club) told me to stick to my guns.” 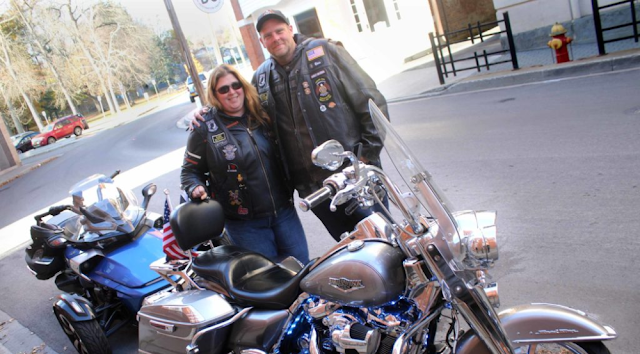 Charlotte and Chris Chase pioneered the alochol-free “Dry Run” at the Oneonta chapter of the American Legion. (Ian Austin/AllOTSEGO.com)

The Legion Riders, a branch of the American Legion, uses motorcycle rides to raise funds for local and national charities. “We’re motorcycle enthusiasts, and like to say we love our community, vets and pets,” said Chase.

And though a few riders grumbled, Chase was surprised at how many came out in support of the Dry Run.

“We saw a lot of riders who hadn’t come with us before because they were concerned with the alcohol use, now they’ve started riding with us,” he said. “The Red and Blue Knights, older riders and responsible folks – we gained people who love the idea!”

In addition to new riders, Chase said they’ve also seen an increase in sponsorship for their rides, and have started working with the Oneonta Police Department to escort the veterans taking the Leatherstocking Honor Flight out of the Albany International Airport.

“It’s usually our coldest ride, but when you see those veterans being honored during the ceremony, it doesn’t matter how cold it is, it warms you right up.”

Chase had patches made, and since then, all of their six annual rides have been dry. “It forces us to get creative,” said his wife Charlotte. “But the fun part is finding places that don’t serve alcohol.”

They’ve stopped for ice cream and at scenic spots, as well as the motorcycle safety track. “That was awesome,” he said. “We got to get out there and go really fast.”

They still stop to see their fellow veterans at other Legions along the route, but pledge to abstain from buying alcohol at the bar.

In addition to promoting safety, Chase also wanted to raise awareness of drug and alcohol abuse among veterans, as well as the drinking culture among bikers.

“We’re working with LEAF Inc. to write educational materials about dry runs,” he said. “We want to change that perception about bikers.”

“I am so happy with what Chris is doing,” said Julie Dostal, LEAF executive director. “With veterans, motorcycle deaths account for 38 percent of deaths by motor vehicle accidents. With this data, it’s very clear that the Oneonta Legion Riders are taking the safest stance possible to keep our veterans with us longer.

“They’re a treasure, and they deserve to be treated as such.”

LEAF was the beneficiary of this year’s Fall Foliage Fun. “We were honored,” said Dostal. “And I hope that the Dry Runs will catch on across the state and go national.”

The patch isn’t just for American Legion Riders. “Any motorcycle club can use it,” Chase said. “We’re putting together a website that will have the logo and promotional materials that they can use to promote their own Dry Runs.”

He’s shipped patches as far away as California, and when the Dry Run website goes live, motorcycle clubs will be able to chose which charity gets the proceeds from the sale of the patches.

“We want to keep growing it because we know it will make a difference,” he said. “Statically, we’ve already saved a life.”