Ride for the Fallen 7 this weekend

Columbia, New Hampshire, USA (July 4, 2019) — Thousands of bikers are expected to ride this weekend in honor of the seven members of the Jarheads Motorcycle Club, whose lives were taken from them in a tragic crash last month, in an event that organizers say has grown from a “small ride” to a “movement.”

“We all come together, that’s something I expected, but I could have never imagined this magnitude,” organizer Brian DeSimone told the Herald. “The outcry of support has been unbelievable.” 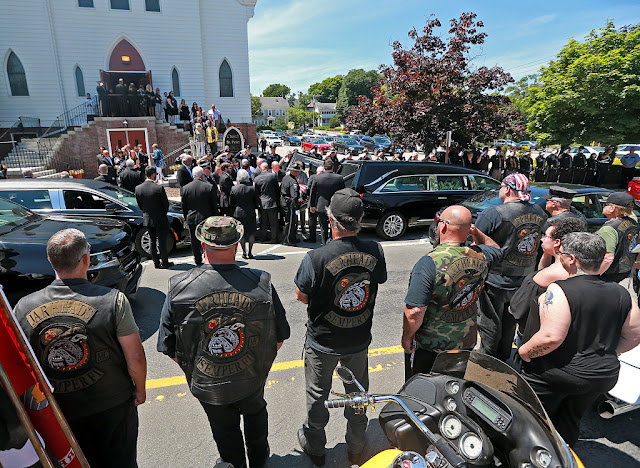 Members of the Jarheads Motorcycle Club, salute the casket outside St. Peter’s Church during the funeral for Michael Ferazzi on June 28, 2019 in Plymouth, Massachusetts. Photo: Matt Stone

A Facebook post about the event, dubbed the Ride for the Fallen 7, went viral as motorcyclists across New England wanted to pay their respects to the seven bikers who died in a collision with a West Springfield trucker on June 21. Another three were hospitalized. DeSimone estimates anywhere from 1,000 to 5,000 people will ride Saturday, traveling from as far as California.


“We might not know them, but we are touched by them,” Jim Desrosiers said. “All of us bikers are a family, so when one of us falls, we all fall.”

Desrosiers, of Oakham, is planning to ride out of his original hometown of Worcester on Saturday with 14 other bikers from Massachusetts, Connecticut and New York to meet at the event’s starting location in Laconia, N.H. He visited the site of the crash four days after it happened.

“I had chills,” Desrosiers said. “The first cross I saw, it brought me to my knees.”

Rides this size can take up to a year to plan, DeSimone said, but they pulled it together in just 10 days. DeSimone, of Derry, N.H., didn’t know the members of the Jarheads clan but felt compelled to get involved after his own near-death experience three years ago.

“I almost died in a motorcycle accident and the first thought in my mind was the victims’ family and friends, what they’re going through,” DeSimone said. “The support — the outcry and support I got — I wanted to give back.”

Jackie D’Alio, a member of the Massachusetts Patriot Guard riders, felt “tremendously sad,” but also “angry,” after hearing about the investigation into the Massachusetts Registry of Motor Vehicles, which found that trucker Volodymyr Zhukovskyy, accused of crashing into the pack of motorcyclists, should have been under an automatic suspension after a May 11 OUI arrest in Connecticut. His was one of tens of thousands of alerts on out-of-state driving infractions that sat unprocessed in the RMV for more than a year.

“These vets fought for our freedom to even be able to ride. The least we can do is ride in their honor. In the biker family, they will never be alone,” D’Alio said.